The opportunity to be a language assistant in Switzerland is exactly what she wanted, says the young Swiss Canadian Leslie Schmid. She teaches at the cantonal school in Zug with youthful vigour and special inspiration from overseas. This variety in the lessons is appreciated by both pupils and teachers alike. 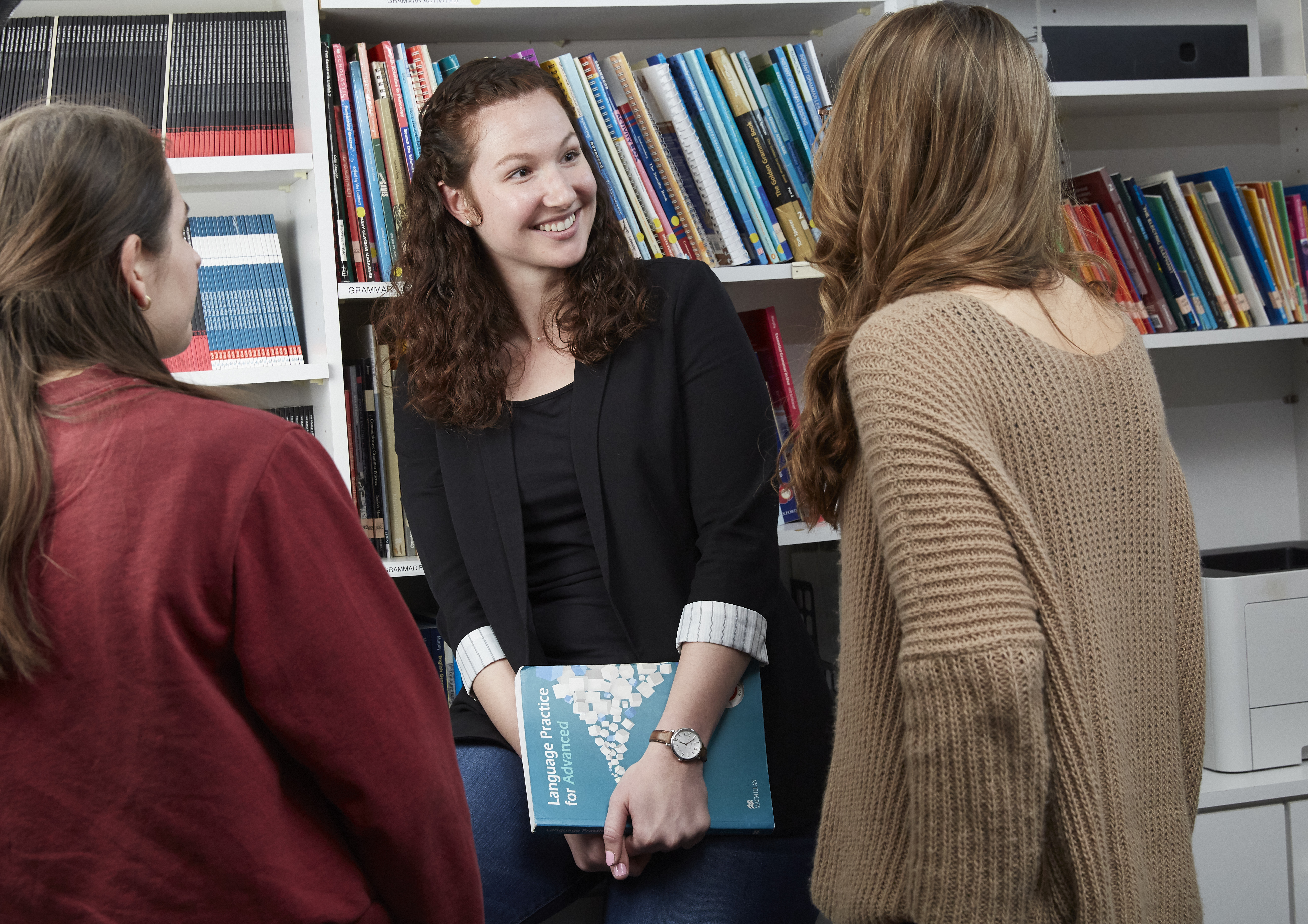 “10th March 1998!” The answer comes like a shot. That was the day that Leslie Schmid emigrated with her family from the Solothurn municipality of Welschenrohr to Canada, to a place called Chesterville in Ontario. This is where the now 24-year-old also studied English as a foreign language and educational theory. And she now works in Switzerland at the cantonal school of Zug as a language assistant for English. After graduating in 2015, she was very keen to take her first career steps as a teacher in Switzerland, says Leslie by way of explanation, adding, “I wanted to go back to my roots, visit my family here and, at the same time, gain my first experience of working life.”

I just wanted to go back to my roots and, at the same time, gain my first experience of working life.

So, the offer from Movetia to work as a language assistant at a Swiss school came at just the right time. She had come across this opportunity on a website for teachers of English in Switzerland. Then everything happened very quickly. She did not need to apply for any additional papers; after all, with dual Swiss-Canadian citizenship, she already has a Swiss passport and is also allowed to live and work in this country at any time. Since last September, she has been teaching at the cantonal school Zug in a total of 16 classes and is entrusted with half of each of those classes. She has just taken on new pupils for the second school term.

And these pupils are very taken with the young language assistant. “When I’m learning English, I find it really encouraging that Leslie tells us about her native country and that she’s so young. She just gets the language across to us in a different way than we’re otherwise used to in school,” says 16-year-old Julia, who is taught once a week by the young language assistant. And her friend and fellow pupil, Johanna, the same age, echoes this sentiment: “Leslie just makes it so much fun, like with the word game charades.”

Julia comes up with yet another positive aspect regarding the Swiss-Canadian dual citizen as an English teacher, “She has a really lovely accent.” It does make a big difference that Leslie comes from Canada. “We see her as a role model and try to speak like she does – because we notice and we know from her that this is how it should sound.”

We see Leslie as a role model and try to speak like she does, because we notice and we know from her that this is how it should sound.

Both schoolgirls say that they can see, from Leslie’s example, how rewarding an exchange can be, and they could easily imagine going to Canada themselves one day. Johanna says about that, “She’s made the country really appealing for us.” In any event, when she leaves the cantonal school, she would very much like to spend an exchange year there or in another English-speaking country. “Then you have both things at the same time; you learn the language better while also making progress in your education and training!”

And yet neither Julia nor Johanna are particularly experienced in languages. Julia would probably like to study criminology later on, and Johanna veterinary medicine. And both are sure that they will study in Switzerland. But afterwards... why not work abroad some day? Johanna simply says, with a mischievous smile, “There are animals all over the world.”

The cantonal school in Zug has already been deploying language teaching assistants in language lessons for quite a few years now. Teacher Richard Vogt, Head of the English Department at the cantonal school Zug, talks, without exception, of good experiences. He sees great advantages in the possibility of halving classes each time thanks to the support of the language teaching assistants. “In that way, I can give my time and attention much more specifically to the different needs of the pupils.” For example, at present, one of his classes is, he explains, of very mixed ability – with many youngsters who speak English to mother tongue standard. “By teaching half a class at a time, I can split them into a group of their own, and the others, for whom English really is a foreign language, into the second group.”

In any case, lessons are enriched.

But don’t the pupils sometimes take advantage of the fact that, as well as English, Leslie can also speak perfect German? Vogt laughs and shakes his head, “Very few of them know anything about that!” And Leslie also counters this assertion vehemently. If any of her charges should attempt to speak German to her, she would always answer in English, saying that she doesn’t understand. But that doesn’t happen very often, she says. Most of them tried, right from the very start, to say everything to her in English.

New horizons thanks to young Swiss nationals from abroad

Schoolteacher Mr Vogt sees even more advantages with the language teaching assistants. “Because they’re young, they can also motivate pupils in a different way.” And, in any case, lessons are enriched when pupils find out very directly about the country of origin of the language assistants. After all, in addition to learning the language, it’s definitely a matter of learning something about the culture of another country too. “So, ideally, I’d like to have assistants from very different parts of the world where English is spoken – from New Zealand, South Africa or Jamaica.” For legal and organisational reasons, up to now the language teaching assistants for whom Movetia has found positions came almost exclusively from the UK or Ireland. Movetia is now opening up these new horizons by arranging placements for Swiss nationals from abroad.

After this year, Leslie Schmid doesn’t know yet whether her journey will take her back to Canada again in the summer. At the moment, however, she is looking for a job here. She would like to spend another year as a language assistant in a school somewhere in Switzerland. For its part, the cantonal school in Zug will, in turn, apply to Movetia for new language teaching assistants. Perhaps a Swiss national living in Australia?